The name VerQuin is a derivation of Vertex of a Quincuncx that creates a stable truss structure for placement of a geodetic reference point.

It is an acknowledgment of the integrity of the Deep-Drilled Braced Monument widely deployed in geophysical research networks. Funding of the research and development, implementation, and operations for large scale geodetic research was provided by the National Science Foundation (>$200M), NASA (>$6M), Keck Foundation (>$6M), U.S. Geological Survey (>$3M), the Southern California Earthquake Center (>$2M) and others. The deep-drilled braced monument has its roots in Frank Wyatt and Duncan Angew’s design of the late 1980s.  The short-drilled braced monument has its origin from John Galetzka, Ken Hudnut, and Frank Wyatt in the 2000s (Hudnut et al., 2002).

Most of the data is publicly available.

We install deep-drilled, short-drilled, and short-driven braced monuments as well as hybrids. All monument materials and fittings are 304 or 316 stainless steel.   The monument that is selected is based upon geology, access, project goals, and budget.  However, when in doubt, install a deep-drilled braced monument. It gives the highest probability of the most stable position time series.

The deep-drilled braced monument is the gold standard for geodetic-quality monumentation. Rebar and grout-filled stainless 1-1/4 inch 304 stainless steel pipe legs extend 32-35 feet into the subsurface. Grout is pumped through the pipe to fill the drilled hole from the bottom up to cement fractures and encase the pipe. The upper 15 feet of the monument legs are decoupled from near-surface forces using foam-wrapped PVC.  This decoupling material isolates the monument from expansion and contraction from clay-rich soil and stratigraphy and the hydrologic effects from shallow fractured rock.

The vertex of the legs typically stands 5-6 feet in height with the SCIGN antenna mount threaded, then welded, atop the intersection. The angled, bracing legs with ~650 lbs of steel and ~3,000 lbs of grout give the monument stability. Together with the vertical center leg, the monument has 5 axes of resistance to non-tectonic motion and is braced/grouted into strata or rock from 15-35 feet in depth for each leg. Compare this with a pillar or post monument that generally extends 4-10 feet into the subsurface, has only 1 axis for stability, and has no decoupling materials.

MPEGs are based on the 3D specifications of the VerQuin deep-drilled braced monument. The design is the evolved architecture from the Wyatt-Agnew quincunx-deep of the 1980s, SCIGN-style of the 1990s, and PBO-spec of the 2000s. It is a 3,500 lb anchor into the Earth’s crust and is the most stable geodetic-grade monument for use in GNSS precise positions.

A VerQuin deep-drilled braced monument with stainless steel components and legs that extend 34’+ in rock or sediment. 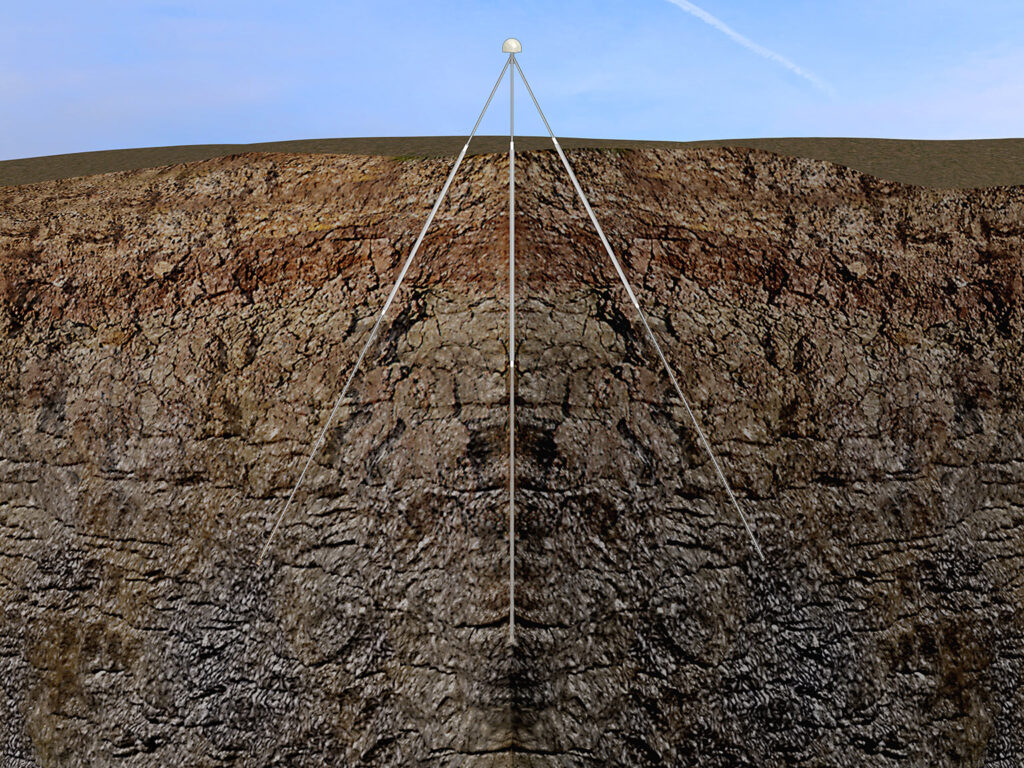 Cross-section of the deep-drilled braced monument showing the depth of the legs and their relation to the upper decoupled section where weathered rock with expansive clays are isolated. This ensures that the monument’s position accurately measures that location on the earth’s crust. 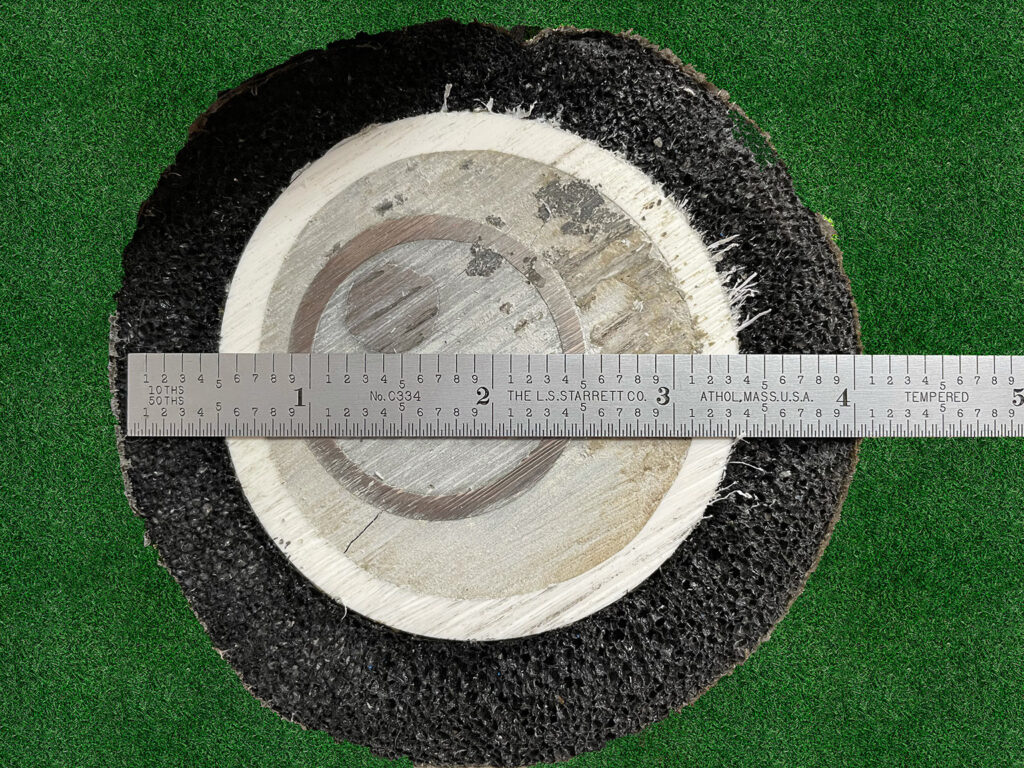 Cutaway of a deep-drilled braced monument leg showing 1/2″ rebar, 1-1/4″ stainless steel pipe, foam-wrapped PVC and grout. The foam decouples the upper 15′ of the monument from surface effects, leaving the lower portion of the monument legs anchored into unweathered strata/rock. 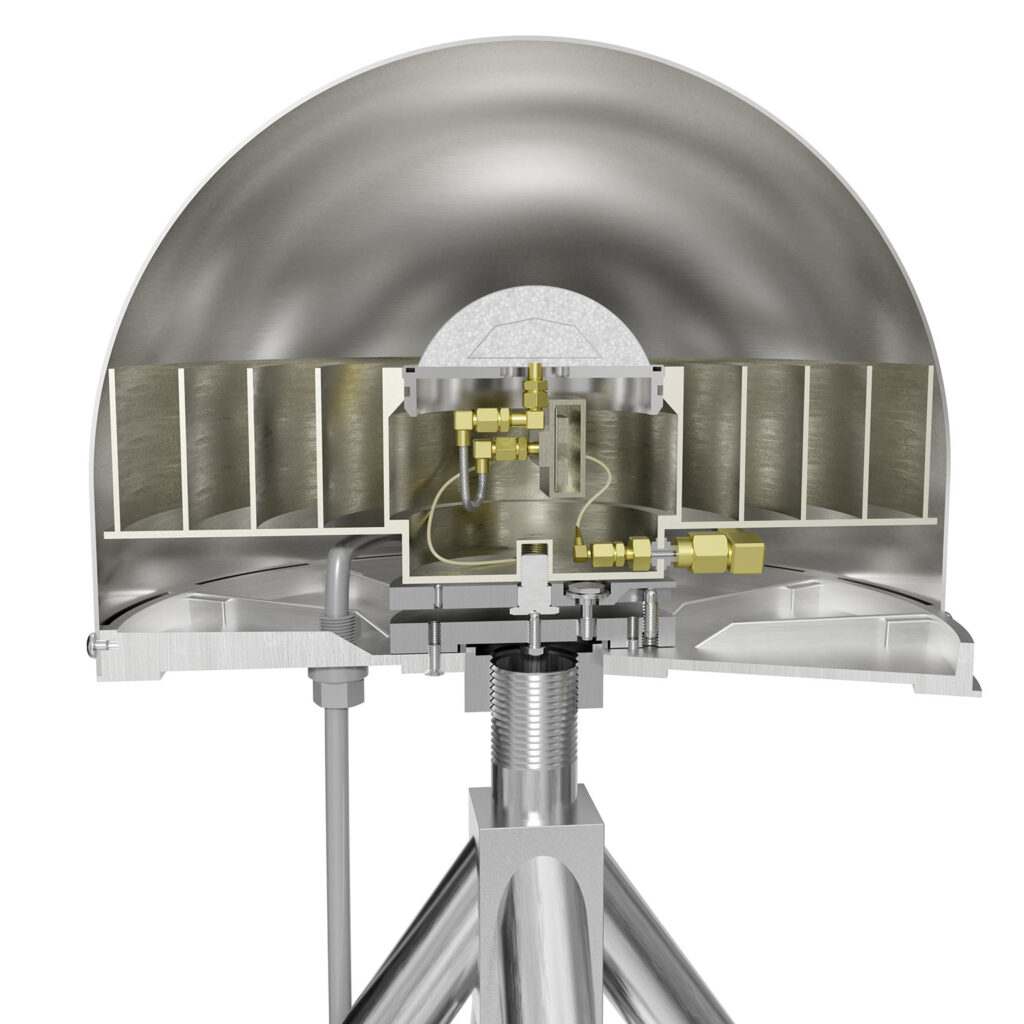 Rendering of a chokering antenna cutaway to illustrate the components under the SCIGN radome. The whole focus of the stable monument, power system, and GNSS receiver is the geodetic reference point just above the vertex of the quincunx monument, atop the threaded pipe. This is the point that is measured repeatedly, every second, for decades. 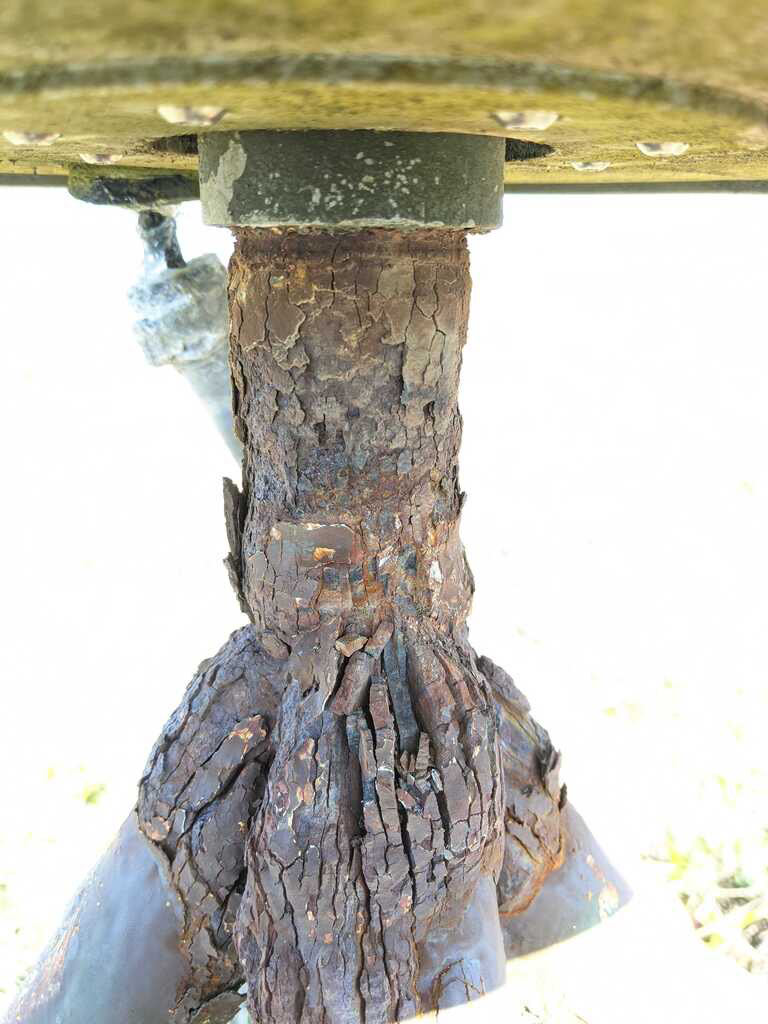 Use of galvanized pipe is not advised for geodetic monumentation. This is what 21 years of above-ground weathering can look like. Imagine what is below ground. Credit: Adam Woolace/UNAVCO 2021

Short-drilled braced monuments (SDBM) are typically installed into competent, unfractured bedrock with the absence of soil or expansive clay. Stainless 1” 304 bar is epoxied into rock with four or five legs (one vertical and the others angled). The depth of the legs ranges from 5-7 feet. The junction of the legs is usually 4-5 feet in height above the ground surface. This light-duty installation can yield stability that approaches the deep-drilled braced monument in the proper geologic environment but allows for a smaller budget and a wide spectrum of access options, especially in remote locations (i.e., accessible via helicopter or pack animals).

Short-driven braced monuments (SVBM) are an alternative used in sedimentary strata when it is not viable to use a drill rig for a DDBM, or the budget doesn’t allow it. The 1” bar or 1-1/4” pipe is driven 7-12’ into the subsurface and constructed as other monuments (but without grout/epoxy).  Where expansive clays are a concern, the legs are sleeved with a 3-4’ long section of foam-wrapped PVC akin to the DDBM. We should point out that while preliminary results indicate that the SVBM design is relatively stable, the sample size of these types of monuments is quite low. 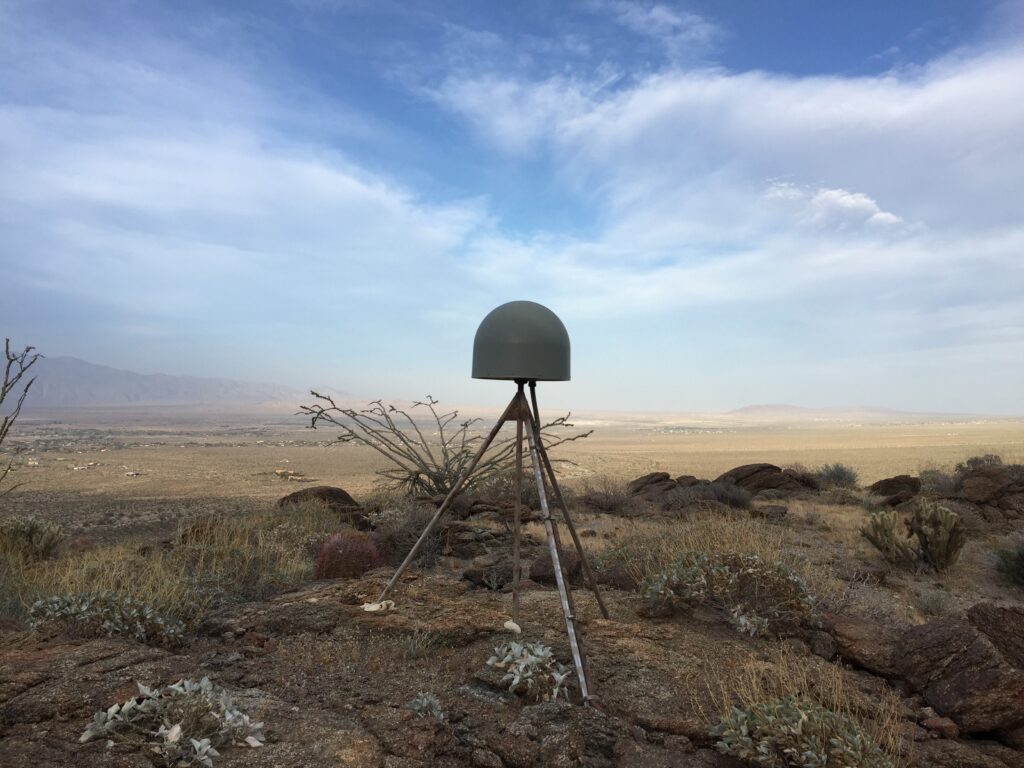 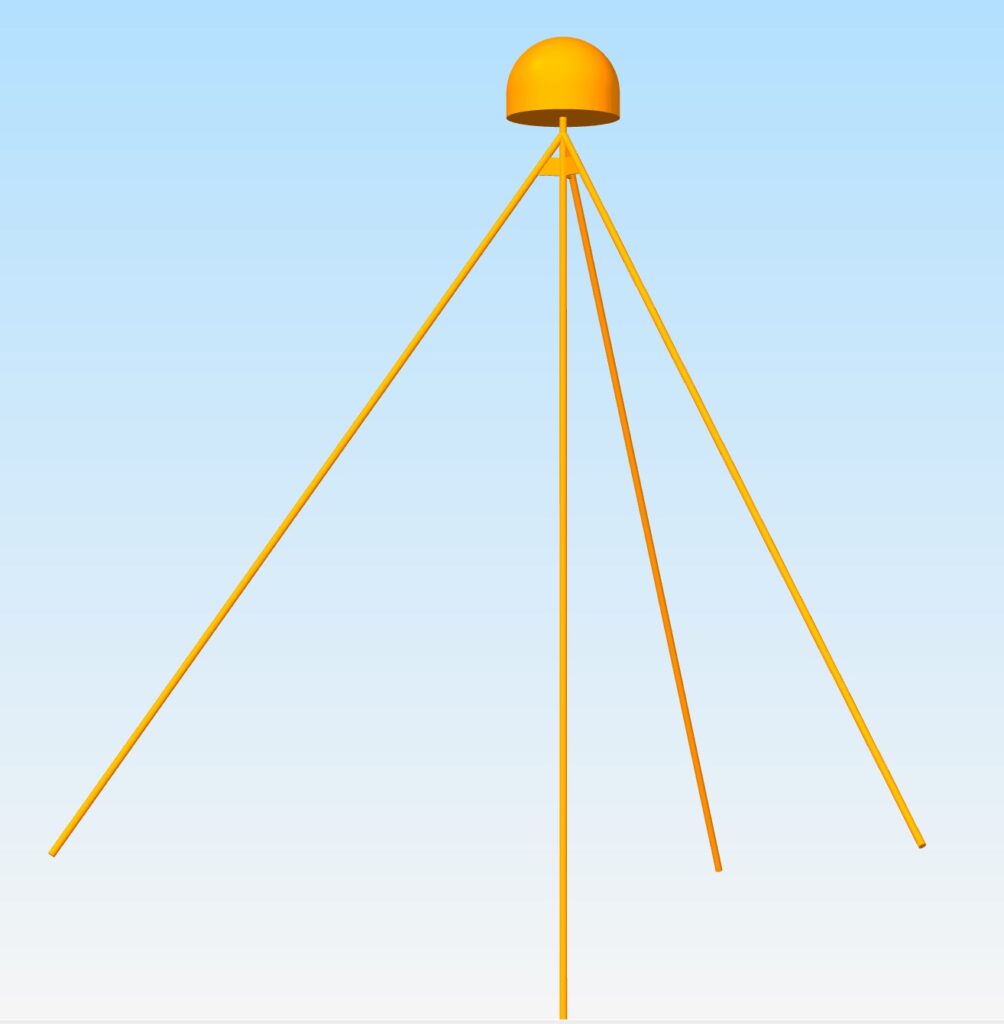 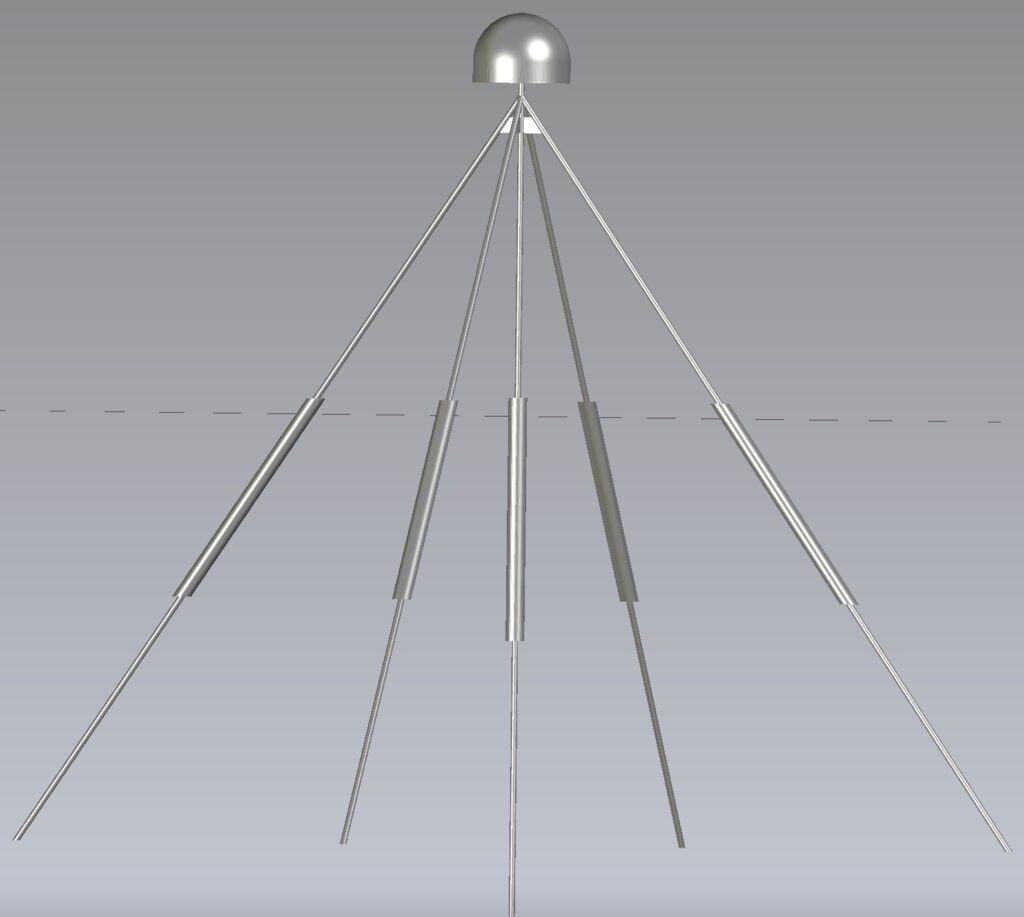 Quincunx short-driven braced monument with base isolation in top 3 feet of the subsurface. 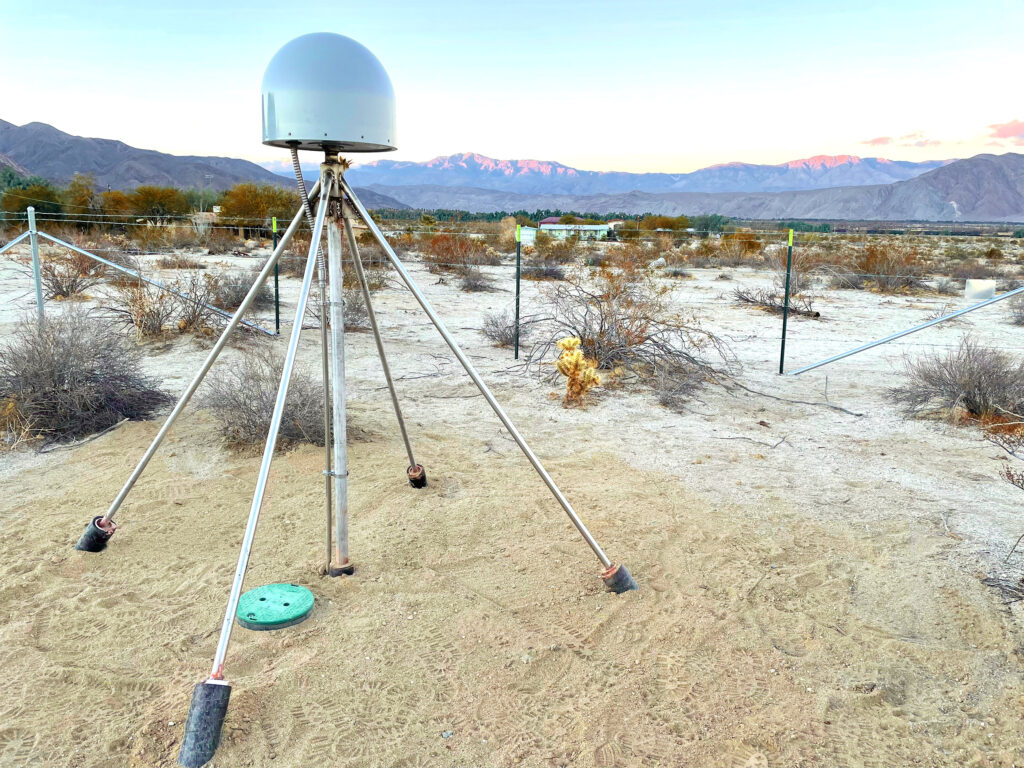 GZKA is a quincunx short-driven braced monument installed in Holocene alluvium of the Borrego Valley, CA. The braced legs are driven 5-7′ into the subsurface and secured with ~600 lbs of concrete/grout. Foam-wrapped PVC in the upper portion isolates the monument from thermal and wet/dry cycles. VerQuin 2022 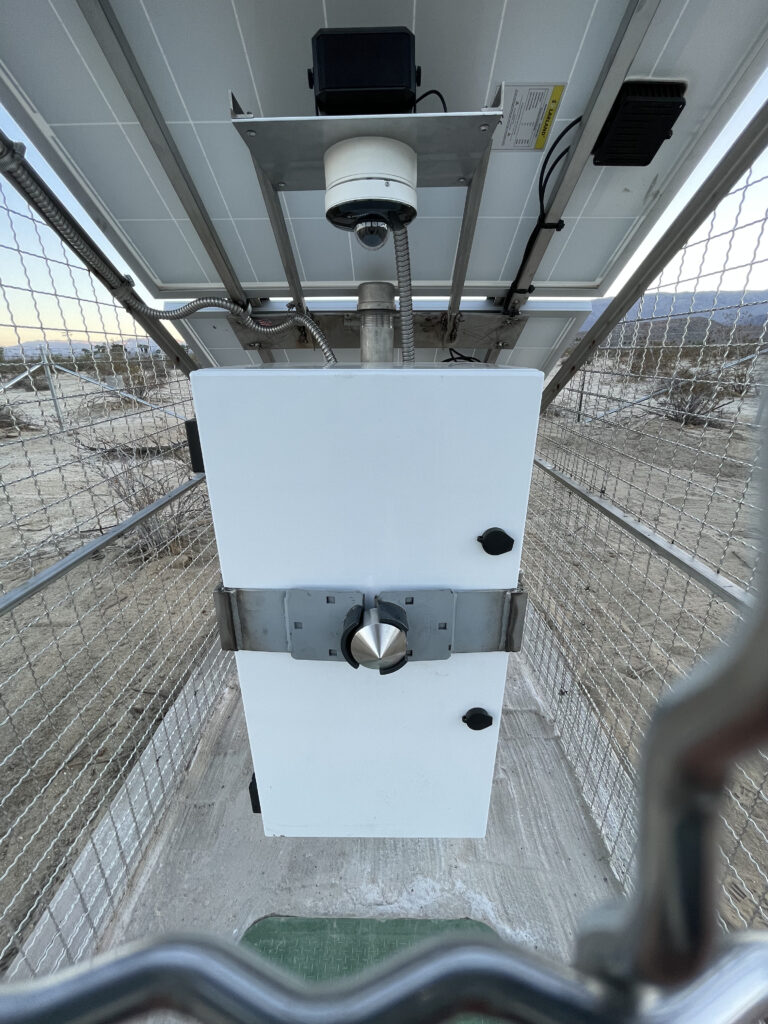 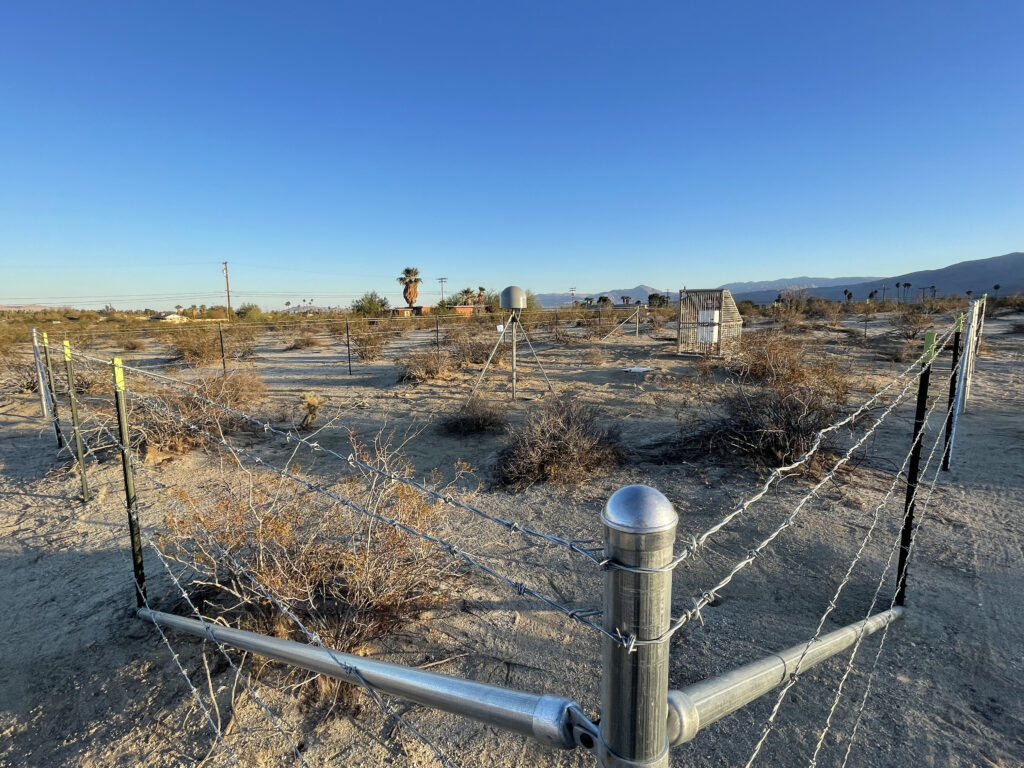 Aside from the typical cGNSS station components, as well as security enhancements, GZKA has a seismic vault (center). 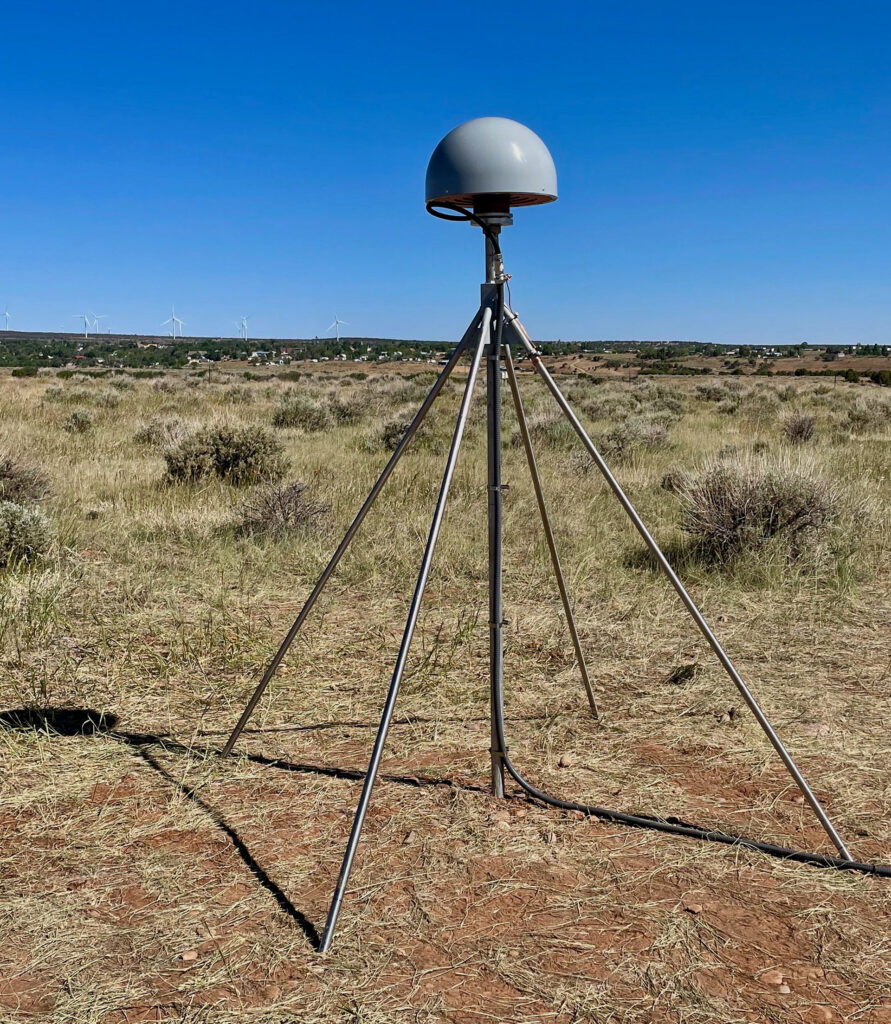 This hybrid short-driven cGNSS monument is co-located with soil moisture sensors and other geophysical equipment that are used in conjunction with synthetic aperture radar for modeling soil moisture. This research is being conducted by the Applied Studies and Technology Program at the Department of Energy Office of Legacy Management and the Numerical Terradynamic Simulation Group at the University of Montana. VerQuin 2022.